Painter, draughtsman, printmaker and writer and maker of inscriptions, born in Brockley, Kent, son of a Welsh printer. Drew as a child , then studied with A S Hartrick at Camberwell School of Art, 1909-15. Between 1915-18 served with Royal Welch Fusiliers during the World War I, being wounded and invalided home after action in France. The war, Welsh myth and landscape, his Roman Catholic faith, poetry and legend were some of the themes that threaded their way through Jones' writings and pictures, usually watercolours rich in layered imagery. From 1919-22 Jones studied under Bernard Meninsky and Walter Bayes at Westminster School of Art, then joined Eric Gill's Guild of St Joseph and St Dominic, in Sussex, 1922-24, also working with Gill in Wales, 1925-7. First one-man show at St george's Gallery in 1927. Was a member of SWE and the 7 & 5 Society and was exhibited widely abroad. Became an accomplished engraver, working for the Golden Cockerel Press and illustrated Douglas Cleverdon's 1929 edition of The Rime of the Ancient Mariner with 10 superb engravings on copper. His book In Parenthesis, of 1937, won the Hawthornden Prize and The Anathemata, 1952, the Russel Loines Award. Cleverdon was involved in the important National Book League exhibition of Jones' work in 1972. He was made a Companion of Honour in 1974. In 2002 a Glynn Vivian Art Gallery, swansea, exhibition celebrated 50 years of The Anathemata. The Tate Gallery and many other public collections hold his work. Jones lived at Harrow-on-the-Hill in modest circumstances for many years. 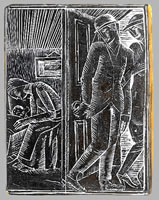