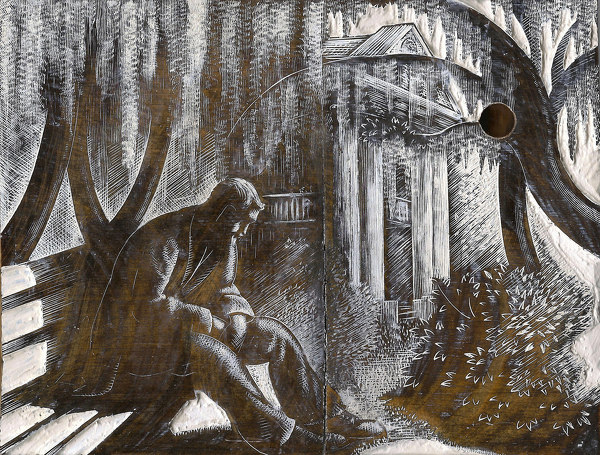 Southern Harvest was published in 1942, The Macmilllan Co, (1942). Lousiana Pilgrimage appeared on p 126.
By the time Clare Leighton immigrated to the United States in 1939, she was already an acclaimed engraver and writer in England. Not only did influential journalists and social thinkers such as Hilaire Belloc, G.K. Chesterton, J. C. Squire, and N. B. Brailsford acknowledge her as a leader in the revival of wood engraving in Britain, they viewed her imagery as thematically compatible with issues they were championing
Southern Harvest was one of her first major commissions;  Accodring to Hickman
Southern Harvest is foremost a book about the common folk of a pre-industrial South, but its full content and style defy simple classification. Wood engravings showing southern agricultural practices and seasonal rituals mingle with documentary, drama, social commentary, even self-psychotherapy.
In the introduction to Southern Harvest, Leighton confesses that the book was created out of her own special need to become rooted in the American continent. She sought kinship by living among the people of the earth and by learning their habits and their lore, writing,
Leighton's wood engravings for Southern Harvest focus on several types uniquely associated with the rural South: the African American, the poor white, and the Appalachian mountain people, groups often portrayed as stereotypes in art and literature.
We are grateful to Caroline Hickman whose article  CLARE LEIGHTON AND THE AMERICAN SOUTH, (Duke Library Magazine 2004) has been of great assistance.